Use Polyurethane Concrete Raising to repair your sinking concrete

Your concrete is sinking because there is a void underneath it (a void can also be visible on the side of a driveway). As the void gets 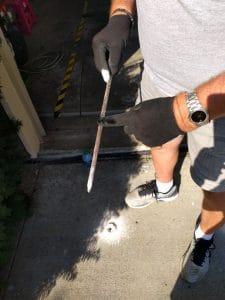 deeper under your sinking concrete the chances increase that it will crack beyond repair. Repairing a concrete driveway, garage floor, sidewalk or steps with poly jacking is 40% less than replacing it. Unfortunately, the age of your home is not the only indication that your concrete won’t need replacing. A home that was built 3 years ago can be just as prone to needing concrete repair as a home 12-40 years old.

Why does a 5-year-old house need polyurethane concrete raising?

One reason the concrete slabs around your 5-year-old house may need repair is due to the speed in which the house was built. As former builders, Jason and Ken know that building a house faster is not better. The concrete may be sinking because the ground beneath the concrete was not packed and prepared to handle the weight of the concrete. Another possible reason the concrete is sinking is water flow from rain and snow melts. This run off may have created the voids due to improper water flow from drain pipes or other structural issues around a home. It takes time to build a house and to do things right. The building a home may be rushed to meet the wishes of a homeowner. A builder may not take the time they need to take to let things settle or expand and contract. Realistically, it should take a year to build a house. That may seem like a long time, but rushing this process may result in sinking concrete around a new home as well as other structural issues.