It’s hard to find a person who does not like animals. According to the ASPCA, 44% of all households have a dog and 35% have a cat. Those are the kinds of animals people want to have around. There are other animals such as skunks, snakes, raccoons, possums, and ground squirrels that most people don’t like. These wild animals can take up residence under a house, deck, or driveway and can cause problems.

For example, a concrete driveway with a visible void may be home to any one of the animals mentioned above. It may be a good place for a skunk, but voids under concrete that are left unfilled can become a bigger problem when cracks in the driveway begin to appear. Cracks in the concrete signify the concrete is beginning to weaken and sink around the void. Time will tell before the concrete is beyond repair and will need to be replaced. A much less expensive approach is to have the void filled by Concrete Raising Systems.

Before any attempt can be made to fix the exposed void where a snake or woodchuck resides, the animal must be removed from the void. Depending on the animal, it could be difficult for a homeowner to remove the animal themselves. Attempting to do so may result in bites, sprays, or failure to catch the animal. Homeowners who choose not to attempt to catch a wild animal living under the driveway may elect instead to contact a local Wildlife Pest Control Company. Concrete Raising Systems has referred many customers to Catch it. The business serves customers in need of wild animal removal in Kansas City, MO to Lawrence and Topeka, KS. 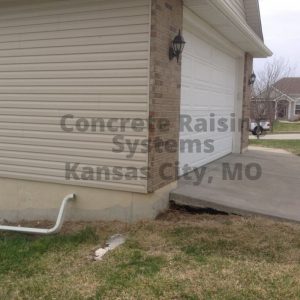 Not all exposed driveway voids have animals inhabiting them. If you have a void, contact us for a quote. Be advised that after the void is filled, the Polyurethane material will need to be covered with fill dirt or landscaping. We recommend customers have a bag or two of dirt on hand to cover the exposed foam. UV rays from sunlight can damage the integrity of the polyurethane over time.

If your driveway void has become home to an unwelcome critter and you are unable to remove it on your own, call a pest control company and then call us. We will fill that void with state-of-the-art polyurethane foam. This will protect your driveway from structural damage and eliminate it as a home for snakes, woodchucks, skunks, or raccoons in the future. Yea, we think they’re cute too. They’re just not cute living under your driveway.

This article was originally published in April 2017 and has been recently updated.